Say mustard greens and watch Florestine Jones’s face light up. The 78-year-old talks about her favorite produce — like Great Northern beans and collard greens — the way  people root for their hometown sports teams.

“That’s why I’m still around,” she says. “Because when I grew up, I had beans and greens. Nothing frozen. Everything came from the ground.”

Not that her childhood was spent on some idyllic farm of shimmering wheat fields and free-range chickens. She’s lived her entire life in Washington DC. And she’s a city person all right, proudly without a driver’s license. She likes trains and buses just fine, thank you very much.

But there’s one thing she can’t do without a car anymore: grocery shopping.

Florestine lives in Ward 8, the southeastern corner of the nation’s capital where only one full-service grocery store serves its 80,000-some residents. Taking transit — or walking 1.6 miles with bags of groceries, for that matter — aren’t realistic options, even for this former athlete who competed in shot put at the annual DC Senior Games.

“I used to pay neighbors $25 to drive me to Maryland,” she says.

In numbers, the nation’s capital tells a startling story of disparities. According to the District of Columbia Department of Health, the life expectancy in the predominantly white Ward 3 is 15 years longer than that of Ward 8, where 92% of the residents are African-American; Ward 3’s average household income nearly quadruples Ward 8’s.

One other stark difference: With similar populations, Ward 3 has nine supermarkets while Ward 8 has one.

"Food justice advocates such as Karen Washington have championed the term food apartheid, which points to how policies and practices have created unequal conditions,” says Lauren Biel. “That results in unequal access to grocery stores, often tracking along racial lines."

Biel is the executive director of D.C. Greens, a nonprofit dedicated to advancing food justice and health equity.

“We’ve shied away from using the term ‘food desert’ mostly because it makes it seem as though it's a naturally occurring phenomenon,” she says. “Access to healthy food is a basic human right. We need to stop thinking about these things as luxury items.” 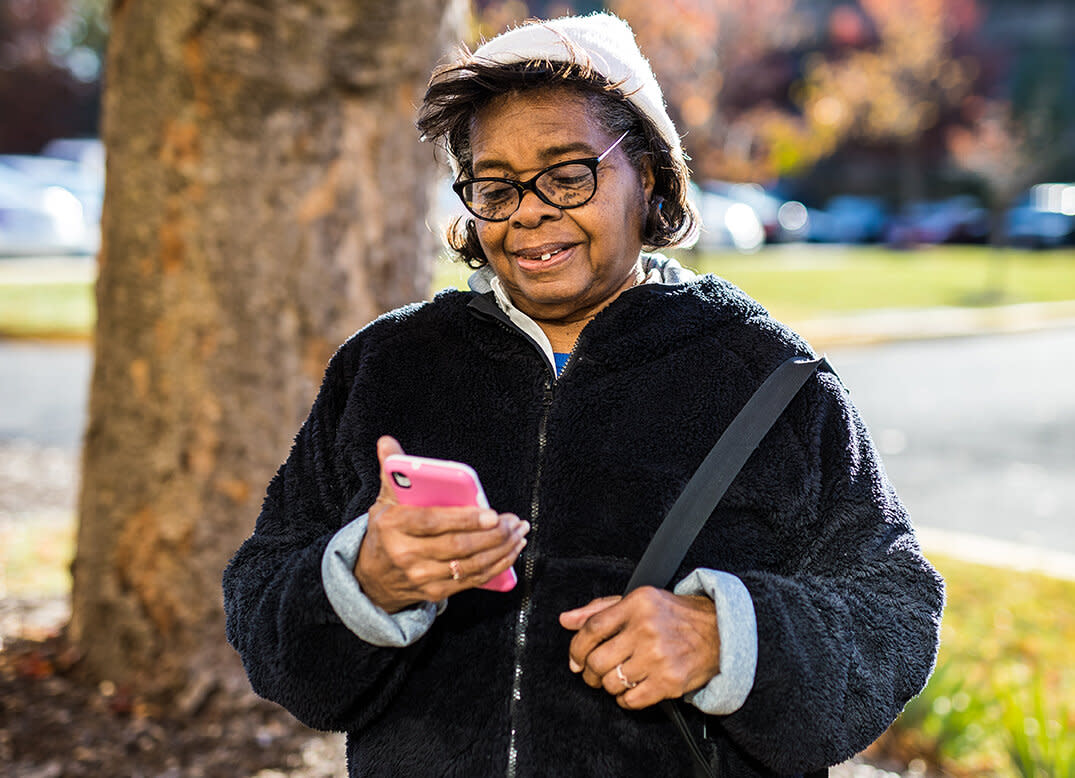 Outside her high-rise on a crisp autumn morning, Florestine takes out her cell phone, cased in her favorite color, pink.

“See, this is how you call a Shared ride,” she explains, visibly proud of having mastered the Lyft app. “It matches you with someone who’s going the same direction.”

When she enters the local Giant supermarket as the destination, the fare comes out to $1.50 — the price set for DC seniors participating in the Lyft Grocery Access Program.

“It’s been an absolute blessing,” she says. “You make your money last. And I just like riding, I just like going.”

At the store, Florestine flips through green leaves like a familiar book until she finds the bunch of collard greens to her liking. She doesn’t need a list. Bananas, eggs, turkey wings, mustard … she knows exactly what she came for, moving purposefully between aisles.

“Cranberry juice is good for my rheumatoid arthritis,” she says, pausing at the juice aisle. “But I’m going to wait for a sale.”

Also on site is Jillian Griffith, an in-store nutritionist who gives free consultations and classes.

“I believe in the power of produce and food as medicine,” she says. “People are proud when they make healthy choices for themselves and their families.”

The nonprofit organized a walk in 2017, in which nearly 500 locals walked 45 minutes from Giant Foods to demonstrate the distance that many in Southeast Washington DC have to travel for groceries. 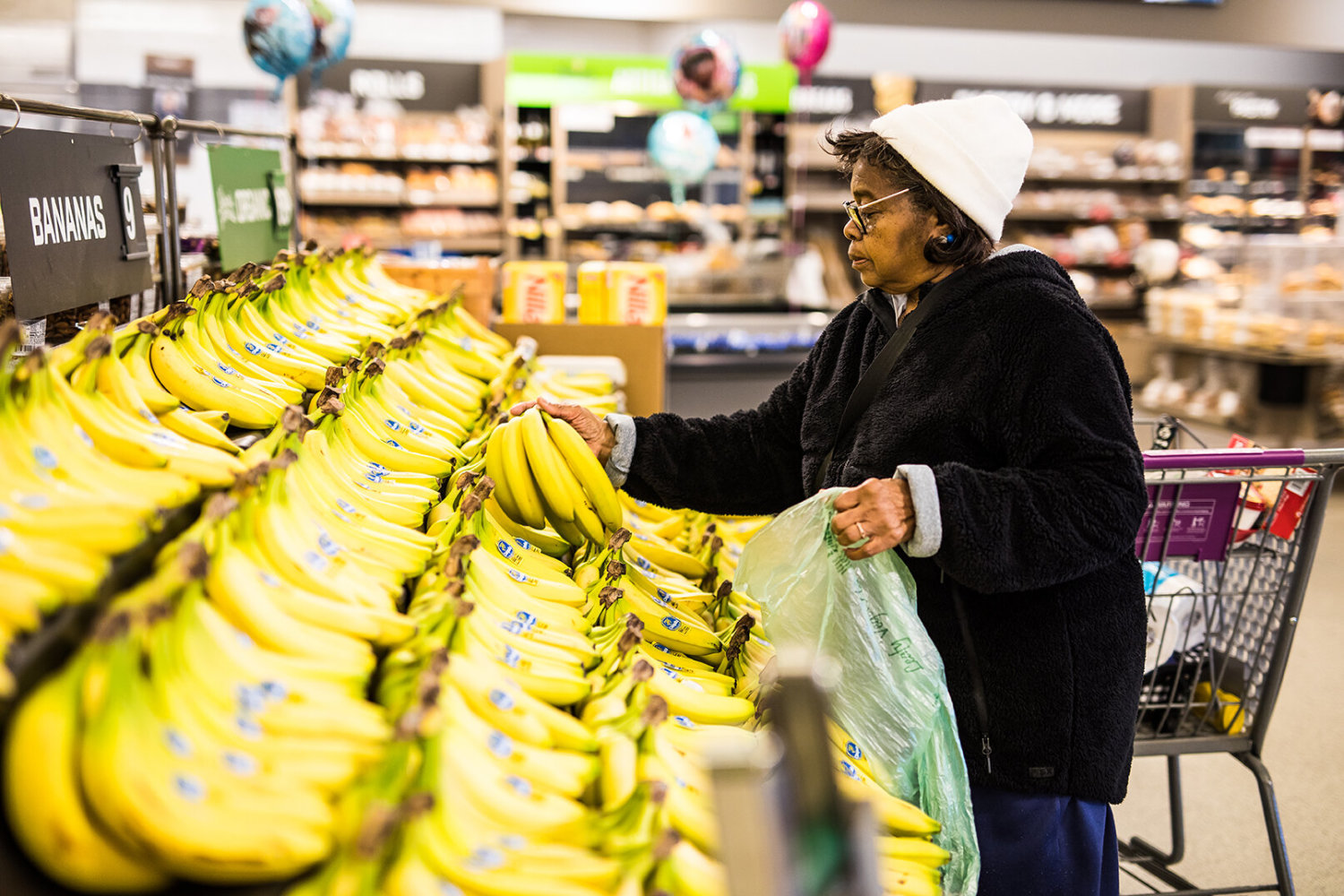 For Florestine, though, the 1.6-mile ride home now takes just a few minutes. Sometimes this leads to conversations with other passengers. Sharing the ride in the front passenger seat this morning is Yvonne Smith, another senior in the neighborhood. Their chat quickly turns to food prices.

Yvonne is an urban forager, adept at finding resources available to seniors. She shows off her calendar, each day filled with events: LGBT senior coffee klatch, board meetings, book club, art lectures ...

“To be resourceful is out of a necessity,” she says. “You have to find ways to use the resources if you want to do things other than just ESP.”

And what is ESP? 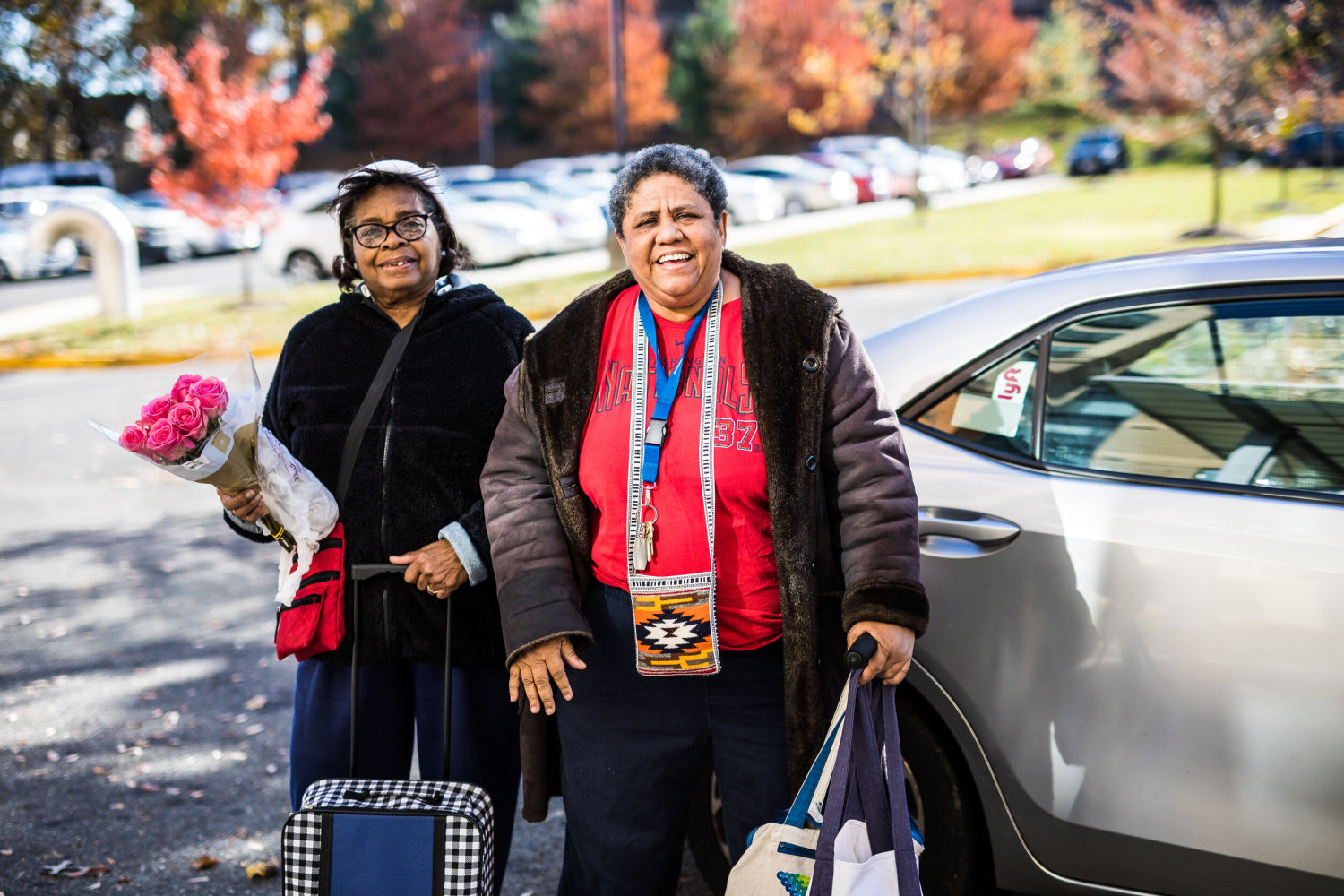 To live with joy and dignity on limited incomes, seniors like Yvonne and Florestine go to great lengths. Transportation remains an obstacle; cheaper rides to grocery stores mean more dollars they can spend on things to sustain themselves, brighten their days — or both.

Balancing bags full of food, Florestine unlocks the door to her apartment, where she’s lived for the last ten years. A pink throw blanket covers a pink sofa; a painting of Jesus hangs on the wall by the table, neatly topped with plates, cups, and napkins.

“I always set an extra place,” she says, “and pray for people who go hungry.”

She spent much of her adult life examining sheets of dollar bills at the Department of Treasury, all the while raising six children. Now retired and living alone, she’s had to find ways to feel fulfilled in her daily life.

When she puts away the groceries, all that’s left are half a dozen pink roses. She unwraps the bundle.

The Lyft Grocery Access Program has provided over 19,000 rides since launching in early 2019. Partnering with local nonprofits and grocery providers, we give low-income families and seniors discounted rides to and from participating grocery stores, food pantries, and farmers markets. Drivers are paid in full because Lyft, and in some cases also our partners, pick up fare differences. With launches in Baltimore, Chicago, and the New York City area this month, the program now serves 17 cities across North America.

You can help. Join Lyft's Round Up & Donate program and select United Way to support families who need transportation access to healthy food options.

Our Commitment to Accessibility in NYC

The Perfect Pairing: Dine Out Vancouver and Lyft